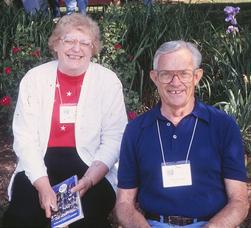 In the spring of 1967, John and Fran Weiler planned an informal afternoon get-together at their home garden for people who liked irises.  At the time, John was a biology professor teaching botany at Fresno State University and a hybridizer of iris.
On October 1, 1967 the Weilers held another meeting with the intent on bringing together as many like minded people as possible.  This could best be accomplished by forming a society, to conduct meetings with programs about planting, soils, fertilizers, diseases, hybridizing, selecting newer varieties and many other topics of common interest since there were no local clubs where iris fanciers could meet. The photo shows Dr. Weiler (upper right) with the 1967 board.
Temporary officers were selected at this meeting.  The first official meeting was held November 7, 1967 at Fresno State.  John Weiler was elected the first president of the Society, covering Fresno, Madera and Mariposa Counties and started with 29 members.  Other firsts were: Hosting the AIS Region 14 Fall Meeting in October 1969, a Spring Show in 1971, a proclamation of April 23, 1972 as Iris Day in Fresno.  The Society held an all-Japanese Iris display in 1976.
In 1981, Fresno State’s 10,000-plant iris garden was opened to the public for viewing with 350 labeled commercial varieties registered with AIS and more than 9,000 seedlings by John Weiler in a 25-year breeding program. The biggest event (also in 1981) was a Spring Bi-regional Meeting with folks from AIS Regions 14-15.

The Fresno Iris Society is a non-profit organization with members ranging from amateur gardeners to outstanding iris specialists. The Society is devoted to encouraging interest and further development of irises for the garden.